We are an all-inclusive Venue with full services from arranging caterers, Bar Services, Florals, decorating, and music entertainment. Alpio Barbara’s center is furnished as an a’ 50s-style diner, with alternating Exotic Car and Memorabilia. It includes arcade games, pinball, pool table, Pac-Man and Air hockey, Corn hole games, shuffleboard, and a car simulator for racing. Vintage gas pumps, life-size mannequins of the Rat Pack, Marilyn Monroe, and various Statues. Large-scale models of military aircraft acquired from private collections and period neon signs on the walls are swooping from the ceiling. Alpio’s At Troon is designed to offer a sense of ease achieved through the installation of AV, Sono’s sound system, and intelligent lighting; we provide a free internet AV system and an 80-inch TV screen for presentations, incredible décor, and custom furniture. Additionally, hosting an event here means access to a team of event professionals that will help you execute your event to perfection 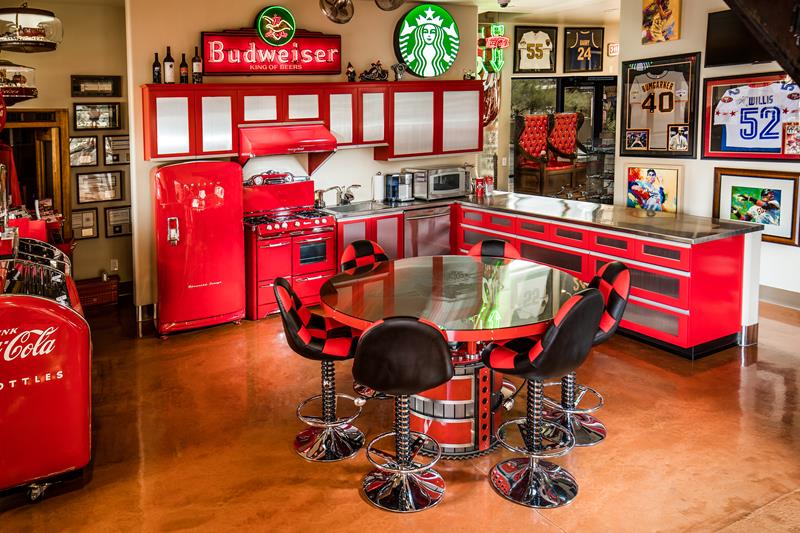 Today we’d like to introduce you to Alpio Barbara and Terri Virga Triebwasser. They share their story with us below: Alpio Barbara is a Californian who now Lives in Scottsdale, Arizona. Like so many successful entrepreneurs, Alpio couldn’t slow down, so he combined his passion and collection of automobiles with yet another business venture. Alpio’s at Troon! Alpio Barabara immigrated from Europe with his family as a young child. Mom, dad, and the youngest of 7 children lived in a single two-bedroom home. I lived in San Francisco and eventually moved to San Mateo and Redwood City, California. Barbara’s passion for cars started in college in 1968 while working at a tire store. In 1969 Alpio Barbara was a college student needing to work more hours while pursuing his dream of becoming a police officer. He had a job in a stationery store and mentioned his search for more work to one of the store’s customers. Al Howard hired him to work at Howard Tire in Belmont, Calif. In 1985 he became a partner in Redwood General Tire, and in 2000 bought his partner, who retired. Barbara would go on to own and operate Redwood General Tire in Redwood City, Calif. Alpio Barbara is currently the President of Redwood General Tire in Redwood City, California. Modern Tire Dealer Magazine also awarded him Tire Dealer of the year in 2016. He decided to retire and move to Scottsdale, Arizona, and has been a resident. He opened Alpio’s at Troon in April 2016, not originally as an event center but as a Man cave where he could store and display his cars and motorcycles and Memorabilia collections. In 2017 he started Cars and Coffee at Alpio’s at Troon Scottsdale. Car enthusiasts roam around the Alpio’s at Troon parking lot, look at the high-performance, classic, Exotics, and collector cars brought in by people from all over the Valley, sip coffee, and mingle. Cars and Coffee started with 20 to 30 cars, growing to roughly 160. On average, 300 to 400 people attend the monthly event. People will come; no matter what you drive, they’re car enthusiasts. It’s a lot of camaraderie over a cup of coffee, no car shows. There’s no entry fee. There are no plaques. You show up, have a cup of coffee and a doughnut; Breakfast Burritos are also available, and walk around and make new friends! Alpio Barbara’s event venue and Car’s and Coffee have been Giving back all proceeds raised, which is second nature to Alpio, who came from humble beginnings. A $2 tip turned into a $40,000 check for charity exceedingly still! Tip donations and Volunteers providing Coffee and donut holes and Breakfast Burritos turned into raising close to $300,000 for Phoenix Children’s Hospital and Saint Vincent De Paul the previous year. This year we are committed to two dental labs to help the underprivileged receive free dental care. Saint Vincent de Paul is now our main charity because they donate 100% of all proceeds to the Cause! Our Goal this year is $200,000, which we have already exceeded half of. Many Clubs and organizations have matched the donation proceeds to include The Porsche Club, Platinum Properties, and Private donations. “It’s no secret that Alpio is passionate about cars, people, and helping kids. I’ve seen how some of these kids and families struggle,” Barbara said. “Sometimes we take things for granted, and I’ve never taken things for granted, and anytime I can help, I help.” Alpio’s at Troon soon transitioned to friends asking if they could host their Birthdays and events. The perfect Venue for any event! But as more people asked to have events in the 1950s-style diner-designed space, he eventually opened it to the public to rent. “I said, ‘What the heck?’ I might as well cover my light bill,’” he said with a laugh. With our changing times and lives, we see a high demand for event centers, and people want to celebrate! Now, the nearly 5,000-square-foot space is rented out about three times per month for events, including weddings, birthdays, holiday events, and more. We did over 26 events in 2021 and projected to double that in 2022 and 2023